Is using themed holidays in your marketing campaigns delightful, or a little too cheesy? Have a look at seven of the most original Valentine’s Day adverts that actually worked!

Themed holiday marketing campaigns, like Valentine’s day, run the risk of coming across generic and a little cheesy. However, when they’re done right, they can be simply delightful. If you’re wanting to make your next Valentine’s day campaign stand out from all the generic holiday noise, you’ll need to come up with a well-planned and original strategy.

We’ve put together a list of seven of the most original Valentine’s videos (TV or YouTube adverts), that actually worked, and why we think they did well. You’ll find all the inspiration you need to turn your next Valentine’s day campaign into a delightful, original and memorable experience for your customers.

It’s said that only 2% of Danish men celebrate Valentine’s day. Danish chocolatier, Anthon Berg, decided to run an experiment to see if they could convert some of the nonbelievers, getting them to actually enjoy being romantic with their significant others. The experiment was run by Professor Paul Zak (renowned TED speaker, specialising in psychology, economics and Management) and the USC Reproductive Endocrine Research Lab.

Danish men were asked to list the reasons that they loved their partners, and then give their partners a box of Anthon Berg chocolates. Blood samples were taken before and after the experiment to measure their levels of oxytocin (the hormone responsible for love). The levels of oxytocin rose, on average, by 27.5% after telling their loved ones why they loved them, and giving them chocolates.

This campaign was successful because it put a new, scientific spin on the traditional notion of romance. It’s also evergreen, in a sense that it can be watched and shared long after Valentine’s day has come and gone.

Wilkinson Sword, producer of men and women’s shaving products, erected a 3D installation of a man’s beard in Ariane’s square, Paris on Valentine’s day (2013). The piece had removable stubble made from rose stems. Passers by were able to pull a rose out of the beard, slowly “shaving” the beard off - leaving a clean shaven face.

This campaign worked so well because it was engaging, and it surprised and delighted people when they pulled out the roses, wishing them a happy Valentine’s day from Wilkinson Sword.

Sometimes you meet someone who’s so right for you, you should just marry them. David Nygaard Fine Jewelers produced a series of quirky videos in their “Gotta lock that down campaign”, advertising their Passion Fire diamond engagement rings.

This campaign was successful because the videos were humorous, bringing in elements of pop culture which made the videos both fun and memorable.

This campaign was very relatable; anyone who’s renovated their home can understand how stressful the process can be. Luckily, when it’s all over, you and your partner can step back and admire your hard work together.

This campaign didn’t focus on the typical romance attached to Valentine’s day, it focused on a more realistic view of relationships, making it stand out amongst all the hearts and flowers.

Tesco, a British grocery store chain, ran a Valentine’s campaign where they matched singles on blind dates based purely on the contents of their shopping baskets. Whether or not the dates went well,  the concept was definitely very unique. Their Valentine’s video went viral with over 1.3 million views.

Not all Valentine’s campaigns need to be focused on couples and romance to tug on your heartstrings. Land Rover New Zealand ran a heartwarming Valentine’s day campaign, reuniting four friends from university after 15 years.

Will Radford, Jeremy Wells, Anthony Dawson and James Shatwell had listed their co-owned, 1957 series Land Rover on an auction site after 15 years of ownership. They had purchased “the Landy” together in university, and had had many adventures in their beloved car. Their listing told potential buyers all about their adventures, and their heavy hearts having to close this chapter of their lives.

The team at Land Rover read the heartfelt ad, and secretly contacted Claire Radford, Will’s wife, to arrange a secret mechanical restoration of “the Landy”, just in time for Valentine’s day.

This campaign showed Land Rover going above and beyond, giving their loyal customers a Valentine’s day gift that they’ll remember forever. The powerful, emotional nature of this campaign is what made it so successful.

Dairy Queen’s Valentine’s day campaign is a humorous take on the cliché that all women want to receive jewelry.

A plastic spoon is cleverly packaged inside the typical, velvet jewelry box and the scene plays out as if his lover has just received a diamond necklace. His lover is overwhelmed with joy and excitement when she opens the box to find a plastic spoon, because receiving a Dairy Queen Cupid Cake was exactly the gift she wanted.

This campaign worked well because it took a clichéd scenario, and gave it a very humorous twist.

Contrary to the popular stereotype of starstruck lovers and romance, the day of love isn’t just for couples anymore.  Rose Ledam, online editorial assistant at the Entrepreneur magazine, debunks some of these Valentine’s day stereotypes in her article Shocking Valentine’s Day Stats That Will Make You Rethink Your Marketing.

Here are some key-takeaways about modern Valentine’s day celebrations:

9. According to Microsoft, 40% of people travelling over Valentine’s day book hotel accommodation rather than a bed and breakfast. 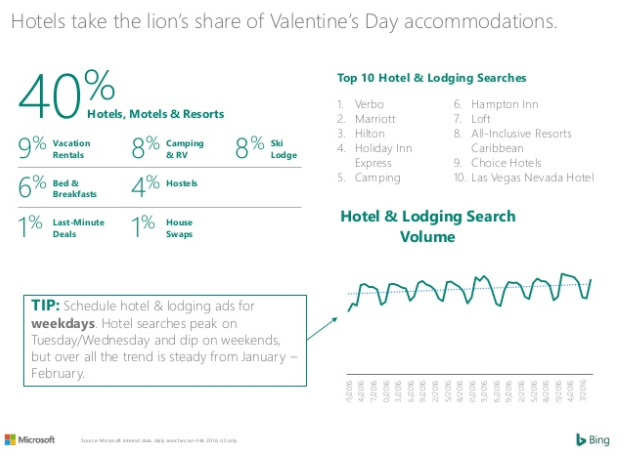 34% of consumers choose to eat out on Valentine’s day, whether they’re on a date or out with a group of friends. February 14th is the second busiest day of the year for restaurants.

Don’t let your marketing campaign become just another cliché next Valentine’s day. Spend some time planning a campaign that stands out from your competitors, and aim to delight your customers with novel, evergreen content, that they will engage with and remember.

Sign up to our blog to receive helpful tips, trends and information about marketing, straight into your inbox.